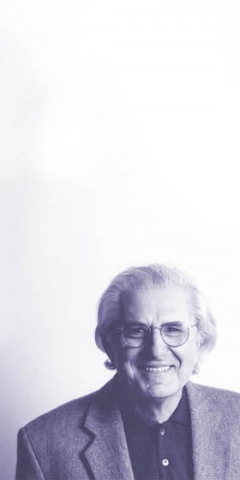 After the end of World War II, as we - those born around 1925 - began to concern ourselves with our education and take up studies, we were starved. Not just stomachs were empty; we also suffered from a lack of intellectual nourishment. Thus for me the encounter with Willi Baumeister at the Academy in Stuttgart was a particularly special experience whose real meaning, as certainly was the case for many others, too, I first became aware of later. That he was a circumspect and stimulating teacher has been said often enough already. Especially pertinent for me personally was that he was, so to speak, a trail-seeker and promoter of interests and talents that often had little to do with his own field of work. He exerted a very unusual power of attraction on all of us who wanted to learn something about art, but his intent was not to narrowly fix in the field of art those who entrusted themselves to their teacher. It was much more important to him to establish connections and show that the form of visual processes cannot be restricted to the fine arts.

For him a sign such as that for the DLW [German Linoleum Works] or an advertisement for Tietz is a design process that also has its rational and emotional conditions like a work of fine art. The continually newly revived controversial issue of whether a signet or a poster can be seen as a work of art or as a work produced in the context of an art exhibition, had no meaning for him. As far as that goes he stood in the tradition of the Bauhaus, de Stijl, and constructivist design of the 1920s. Design for him was always a total communicative process whose given functions he had to fulfill. Aesthetics are an important component and have to be related to the thing. The decorative is excluded because it overruns the content, which is what matters. The transmission's lending of meaning has priority.

The critiques in the academy rooms took place before so many interested individuals (and disciples) that one hardly had a chance for a longer exchange of words and was happy to catch a nod of approval and a grumble. The hours that particularly had an impact on me were the Sunday mornings in Baumeister's house on the Gänsheide to which one was personally and ceremoniously invited. Here began my interest in typography - the artistic arrangement of signs. Baumeister explained in the finest detail to me the typesetting examples, company logos, etc. from his Frankfurt period. I learned many useful things for the praxis beyond the actual art studies and could also finally understand the historical connections of art between the two World Wars.

But also important was the gathering with the master and fellow students. We turned our impressions and discoveries this way and that, discussed and asked, and finally each appeared to know how he wanted to shape his life. Of course there were cliques with various points of interest but the question of existence - especially the artistic one - was taken very seriously by all after the experience of the war. This period of searching for orientation and for standards led to friendships that have survived up to the present day. They also are the results of the studies that led to defining discoveries that are connected to the Baumeister school.