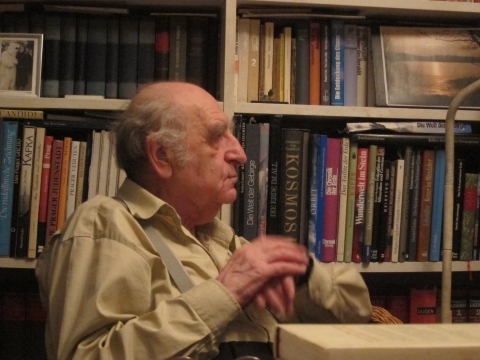 The following is taken from the inaugural address for the opening of the exhibition, Homage to Baumeister, at the State Academy of Fine Arts in Stuttgart on March 2, 1979. Fritz Seitz (1926 - 2017) attended Baumeister's class from 1950 to 1954. From 1965 to 1992 he held a professorship for the Foundations of the Sculptural at the Hamburg College for Fine Arts.

Those who came into close contact with this human quickly experienced the warm charisma of his robust-sympathetic temperament. One certainly perceived energy and inner activity, but their expression was generally softened by an easy-going quality, by a bear-like charm, and by the giggling humor twinkling through.

There was also the marked mildness, the weighed, in each case personal, attention during the discussion of student works, the delayed forming of verbal expression, the tactful judging. We would casually sit in a semicircle, Baumeister among us. He avoided stalking, an authoritarian manner. It certainly smoked where he sat, but that came from the inevitable cigar. We appreciated that. Those of us who had the infernal droning of the German barracks yard behind us also saw in this a guarantee for something entirely different, which we had sought out.

This good atmosphere was also well ventilated. Here I am referring to the rational form of communication that distinguished Baumeister's teaching. During critiques we learned to appreciate an awareness for methodology. Means and ways were considered and that which could be said was verbalized as clearly as possible. That quickly enabled us to explain our work ourselves and also gradually make our own judgments.

Much of what we picked up in the years after 1946 was certainly only superficially applied and came secondhand. This would be emptied out, since we had to grasp that the flourish and the decorative, the handed-down and supervening, could not be the original. Thus the decorative was seen as the deadly enemy of - expression.

We don't paint pictures - we study.

That sentence occasionally stood over the works that were assembled for the critique. It was immensely programmatic. And we also heard:

The artist is not allowed to want results - he must induce a state.

State - Path - Discovery: this succession of cause and effect drew Baumeister's teaching close to the great tradition of Eastern high cultures. Also fitting in this context is this meaningful sentence:

The work must contain the great line of passivity.

One notices: the universal shined through this man's activity, and also that which one calls the universally humane.

I am nearing the conclusion. As already suggested, the occasion of the homage obliged us to not make former adversaries the target of sharp attacks. But I cannot pass over in total silence what was again placed in Baumeister's path after 1946. We need to realize that there was enthusiasm to translate Baumeister's teaching into institutional praxis, which ultimately would have newly structured the entire Stuttgart Academy. Powers stood opposed that in their way knew how to prevent this. There were also to have been certain boycott attempts in the years before 1950. And when he turned 65 the punctual farewell came again, although in certain cases there is always a lovely exception. Enough.

Ladies and gentlemen, let us consider that the majority of once-adversaries probably lie in their graves. Yes, today I would like, at least for this occasion, to ask for forbearance. Let yourself also be connected by a word of Baumeister's from the well-known Darmstadt Debate. He confessed of himself at the time:

I belong to those who are reluctant to find themselves in opposition to something - BUT for that reason I am opposed to and an enemy of those who busy themselves with pointing and judging!

We would also oppose Baumeister's spirit if expressly today, to honor his 90th birthday, we wanted to point at and judge others.

A final word to the youth with whom Baumeister most preferred to be together, whom he loved and who returned his love: we, the former students of this man, wish you the good fortune to meet a true authority and the ability and inner freedom to perceive and use such an authority - opened in the spirit of development that we do not know, that still remains before us as the unknown, but that we want to achieve with our entire being!