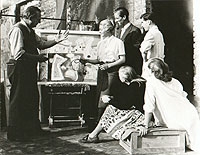 Sophia-Maria von Waldthausen-Brede (1920 - 2010) attended Baumeister's class from 1947 to 1950. After completing architecture studies, she worked for the Stuttgart Department of Building Construction, later independently at Lake Starnberg.

Willi Baumeister worked with us, and we with him, in a small circle. When I came to him in January 1947, his contingent of students was ... already complete. I was taken on as a private student because I not only had six semesters at the Hitler oriented Art College in Dresden behind me. When the academy was not heated, instruction took place in my lodgings or in my room where Karin Schlemmer resided with her mother and sister or in the studio of his house - later especially in the ruins. Working in a small circle generated a collegial togetherness. Critiques consisted of a letting be discovered, a letting be valid, teaching and emptying were like breathing in and out. A fluid interacting of teaching, learning, and doing. The distribution of small tasks. Collaborative enterprises.

Willi Baumeister led us to our own decisions. His pedagogical potential completely agreed with his temperament. He was a good teacher - a lecturer he was not. So I do not want to make any presumptions about his engagement in later mass operation. (Doris Kümmel said that 60-70 students filled the room when she paid Baumeister a visit at the academy.) It is thus difficult, if not impossible, to make generalizations. Moreover, at the time an age difference of six to eight years represented a break that was harder than that between generations. A complete disregard for the established freedom of consumption, from market-oriented behavior, from wanting to make money - a radical change in worldview followed, a substantial shift in mentality. In - as we now say - motivation.

Paul Baur commented: it was an eminent political decision, after twelve years of philistinism and still the lingering character in the family, yes, in society, to steer away from risk. It had to do with an intuitive need, searching for a regulation, for intellectual-moral orientation. Willi Baumeister was completely unknown to me. I had never even seen one of his works. It sufficed that he had been ostracized. I took on a risk. Speculative intentions, such as participating in Baumeister's international reputation, would not have had the slightest hold. The others, those released from concentration camps, soldiers, and also girls exempt from war service, had been led to Baumeister by a similar motivation.

We improvised our studies in an improvised academy that had even restored itself to the conventional pattern, whereby Baumeister, the uncertainty-factor, had nota bene to be integrated. We also represented a foreign body. We were more likely to make contact with the architecture students than with fellow students in the other painting classes.

I hardly recall the first student-exhibition in 1949. I must have been away, bringing my textile designs at Westphalia fabric printers to the man. If I was nonetheless present, it is only thanks to a colleague who took down a few of my works at my place and entered them in the exhibition.

Paul Baur: all the other painting classes exhibited art - we, in contrast, only practice sheets, studies, experiments, analyses. Egon Kingerter attracted attention because he investigated a Rubens's reproduction - the three graces - and dissected it according to picture composition, dynamics, light direction, and so on.

This exhibition - Klaus Erler wanted to see it in Hamburg - might have been of significance for the academy's history. For us it was not important - irrelevant - perhaps not even acceptable. To enter into competition with other art painters? Consciously or unconsciously many of my colleagues refused to participate, as it now turns out. Which in turn proves that we were interested in fundamental research, not in marketing.