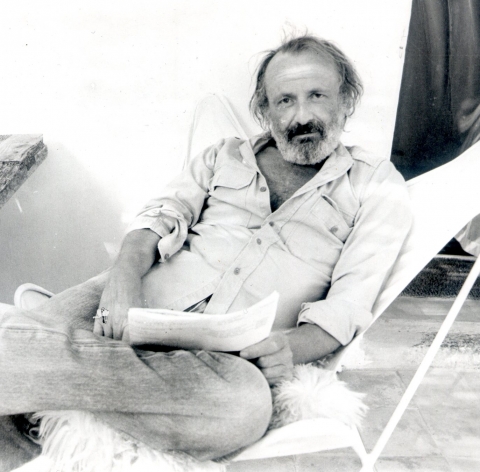 In 1948 I went to Willi Baumeister in Stuttgart. The pictures that I had made up to then and was able to show in exhibitions next to the no longer degenerate masters Nolde, Schmidt-Rottluff, Heckel, etc. paled next to the many new impressions that I received at the war-damaged Stuttgart Academy. The first thing my new teacher said to me was: keep your portfolio closed! He did not want to see the gropings of his students. My task is to empty you all, he explained. Later I understood that very well. He would say: We don't paint pictures, we study - or Everything in nature is based on the sphere, cone, and cylinder. Cézanne and the subsequent steps of cubism were the basis of our studies. Ochre, black, and white were the colors, packing paper and newspaper the canvas. Goethe and Oswald's color theories were only glossed over.

The nuances of white, earth colors are work enough. Whether red, blue, yellow are added is later up to you. There is no rule for color - that is subjective, left to the individual.

Interacting with the elementary media of painting liberated us from the fixed ideas that lurked us in each of us. The emptying allowed for a new beginning in all directions, whether to [make] a picture, stage design, poster or whatever. Everything optically perceivable needed to be organized in the picture, to become part of the ordered totality. The picture elements were used to clarify, to come to conclusions, for proportions that led to new criteria and thus influenced the relative objectivity of art inspection.

Baumeister understood how to make it clear that this insight is also a question of economy in the process of searching for one's own pictorial results. Knowing that was a clear advantage. In short, I was fortunate to be a student of an important painter and certainly the best teacher of the time. The slow shifting of my pictorial elements to the left and right toward the edges ultimately led me to the consequence of dividing my picture surface with a line in the middle. Thereby began the letting go of my teacher. That took place after four years. The contact remained. Baumeister told me that he missed us:

I learn just as much from you all as you do from me!