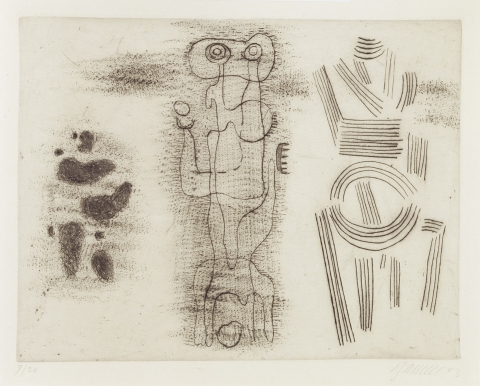 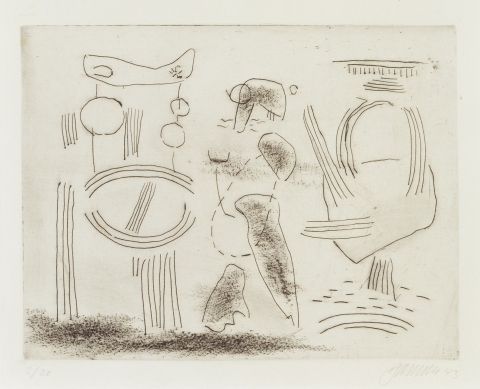 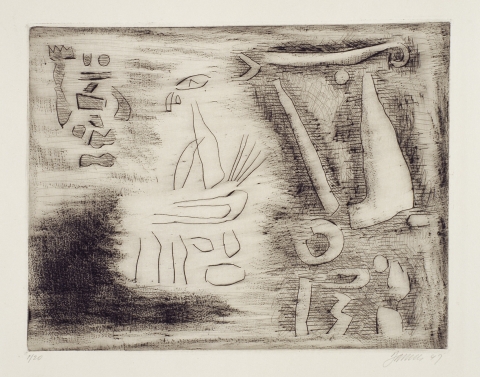 The etching as well as other etch (= eaten) and incising techniques play no appreciable role in Willi Baumeister's graphic print work. Merely nine known works exist - three apiece from 1943, 1947, and 1952.

The older ones (e.g. Dialog OMBU and Relief Figures in Dialogue, both 1947) are directly linked to the illustration series on which Baumeister worked during the last war years and shortly thereafter and which survive in extensive drawings and lithographs.

The more recent leaves deal with attempts to translate line figurations, planar compositions, and tonal structures into the language of etching. He was obviously dissatisfied with the results (e.g. Montaru, 1952).

In all cases these are undoubtedly the artist's attempts - experiments that he did not pursue further. We can assume that the individual stroke lines bothered him and in particular, that the effects he was able to achieve in other original graphic techniques and in painting were not satisfactory in etching. As such, only a few examples of each of the existing works were also printed.

The aquatint technique would have undoubtedly offered him better artistic possibilities, but presumably there was no suitable intaglio workshop available to him. In particular, serigraphy, which Baumeister discovered around 1950, seemed considerably better suited to him in every respect.