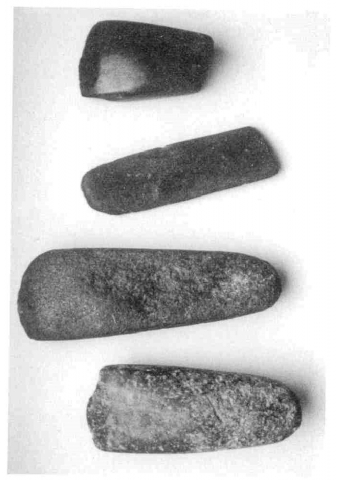 Baumeister was also especially interested in early ancient small sculptures from the Mediterranean and in Egyptian ushabti (shabtis in English). His collection includes fossils, prehistoric vessels, stone axes. While Baumeister taught as a professor at the Municipal School of Applied Arts (Städelschule) in Frankfurt, he took the opportunity to attend lectures by Swiss cultural historian Hans Mühlestein. Mühlestein held seminars on the primeval history and prehistory of humanity and, in turn, was an admirer of Willi Baumeister's art. At this time Baumeister increasingly began to collect stone tools from the Paleolithic to Neolithic periods (about 15,000 to 20,000 years old) of various origin.

He patinated a series of casts in stone and earth tones such as, for instance, the mammoth engravings and small sculptures from the Vogelherd (near Stetten in the Swabian Alb), which are among the oldest discoveries of prehistoric works of art. In Baumeister's view, the origins of art were to be found in the early Stone Age. He investigated the painting techniques of stone-age rock and cave painters and discovered that these paintings needed no binding agents. The ornaments and scratch and line figures of subsequent cultures interested the painter. He allowed himself to be partially inspired by them in his own works as, for instance, in the Stripe Composition on Purple or the Figural Ideogram, both of 1945.

Motivated by the ethnologist Leo Frobenius in Frankfurt, founder of the Africa Archive, whose chief task was the compiling of ethnologic and archaeological objects, Baumeister also collected in this manner. Through viewing illustrations in books of prehistoric rock pictures such as the Valltorta Gorge in eastern Spain, Baumeister gained inspiration for his art. The rock pictures of Fezzan in Libya that Frobenius had photographed in 1932, also had an effect on his art. On August 2, 1934 Baumeister wrote in his diary:

I want to increasingly leave the composition of machine and wall pictures in favor of direct expression through the hieroglyphs (human), in the manner of the runner, the sign. My sympathy for stone tools and also for replicas of nature of the organic or inorganic kind, likewise my penchant for cuneiform script and hieroglyphs, may indeed lie close to the ideograms...

A connection to the Ideograms, Flying, and Floating Forms exists in the smoothly finished stone implements.

These forms float, without touching each other, but are strongly attracted to one another in the plane. I initially intended them to be completely abstract, but further into the process saw figures in them, naturally frontal ones.