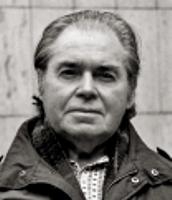 Heinz Bodamer (born 1927) attended Baumeister's class from 1946 to 1950. His activities include working as a commercial artist and as an independent painter and graphic artist in Stuttgart.

For the inaugural summer semester in 1946, the Stuttgart Academy of Arts was to some extent reconstructed on the Weißenhof. The students participated a good deal in the reconstruction.

Through the works I submitted, I was admitted to the painting class and first enrolled with Prof. Steisslinger. But I very soon realized that my decision was not a good one, even though Prof. Steisslinger was an esteemed thoroughbred painter. After a semester I then switched to Prof. Baumeister's [class] and became his student in winter semester 1946. My time as Prof. Baumeister's student lasted eight semesters, until 1950. The first impressions were that Baumeister students painted very versatilely, which impressed me right away, but in particular, Baumeister in his entire person.

The didactic boards present Baumeister's elementary basic teachings as far as I can still remember and were made for an academy exhibition at the Weißenhof. With this basic theory as a foundation, Baumeister then deepened and extended the high school he established in his book, The Unknown in Art. The book was published in 1947 and we read it eagerly. Forty years later I read his book again with the same enthusiasm and see his pictures as a new, sympathetic art form.

Baumeister once said that his pictures wanted to be understood as pure diagrams. This expression is so simply understood, but in my opinion, meditating with just forms and colors, with pure painting, is in fact the most difficult.

In 1951 I went with a letter of recommendation from Baumeister on a study trip to Paris. Afterwards I was a student of [Erich] Heckel and [Helmut Andreas Paul or [HAP] Grieshaber at the Karlsruhe Academy of Arts and there received a state scholarship for the Roman Academy of Arts. During a study trip in London I visited Henry Moore.