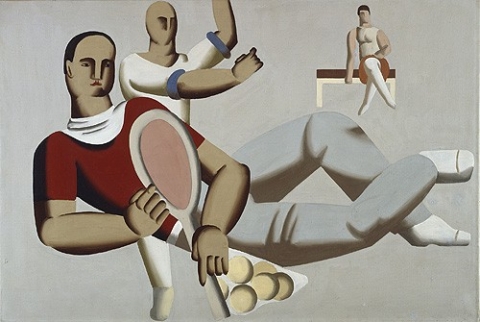 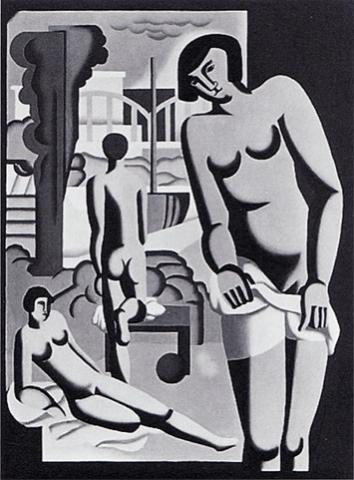 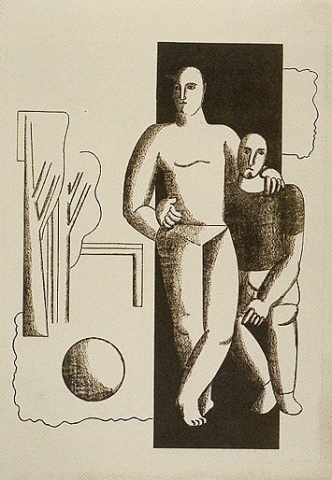 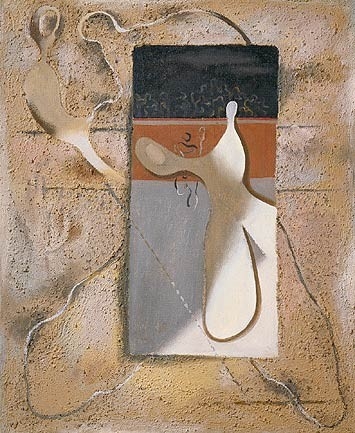 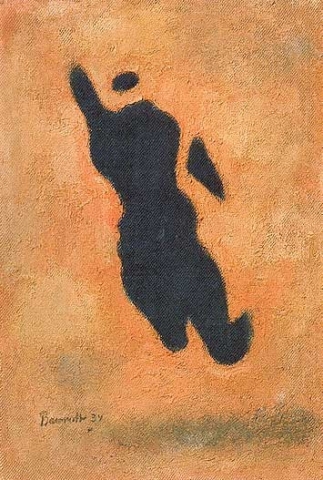 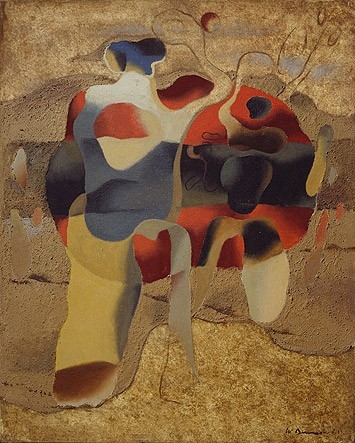 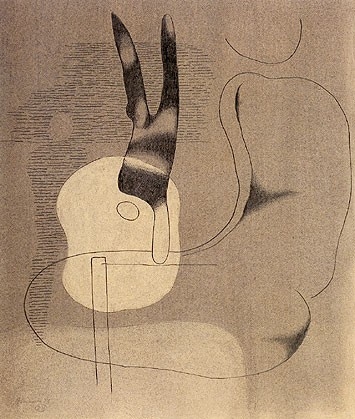 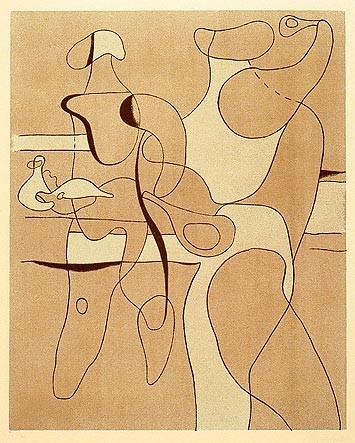 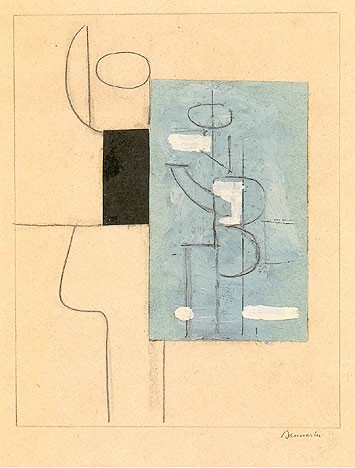 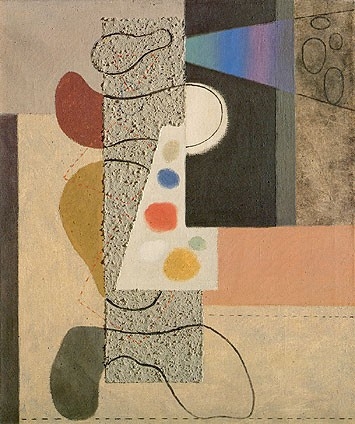 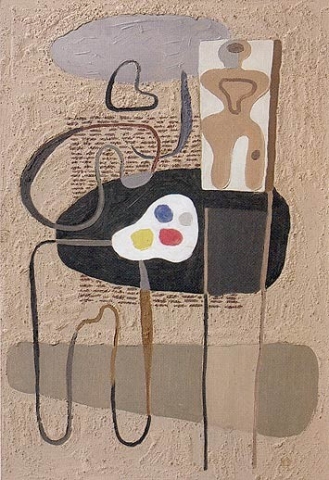 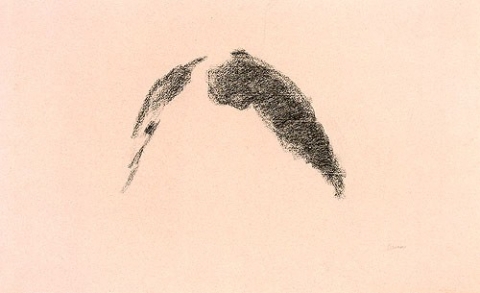 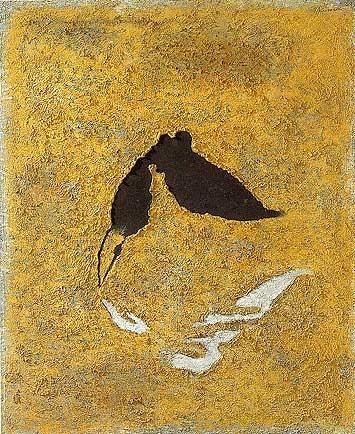 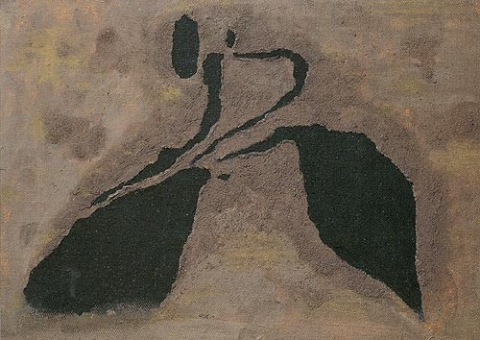 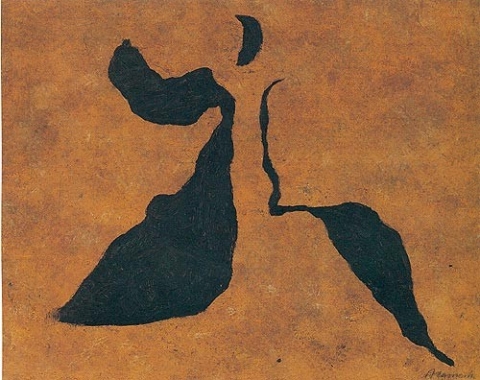 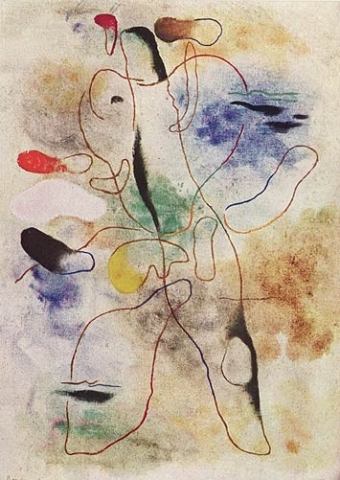 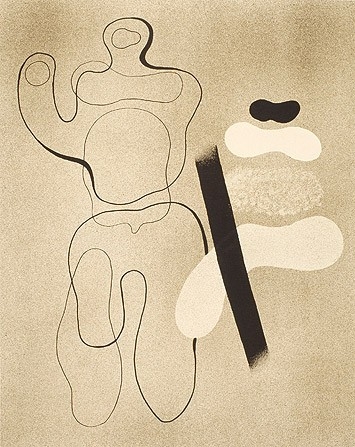 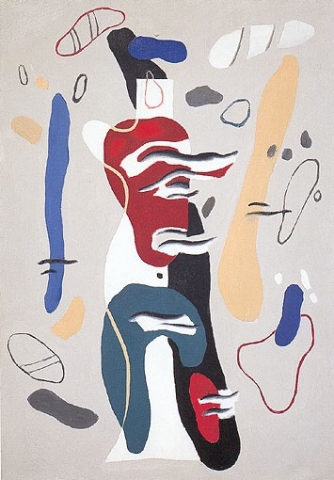 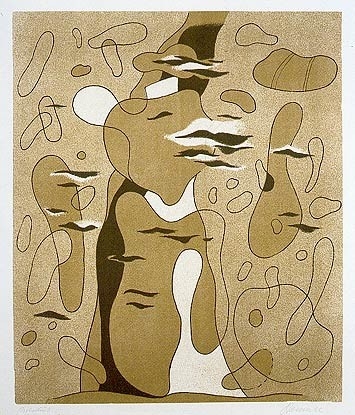 In 1928 Willi Baumeister took on a professorship in Frankfurt am Main. In these years the forms in his pictures grew increasingly softer. He developed new ideas and gradually replaced the severe constructivist painting with organic form. In this way he was able to turn more strongly to the motif of movement. In this phase, paintings with sand increasingly appeared that materially and formally approached what he admired on cave painting.

With the numerous sports pictures two approaches become apparent in Baumeister's work of this phase: in one, continuing from the geometricizing works of the early 1920s there are two-dimensional figures and a clear axial picture construction; in the other, are unusually corporeal and perspectival figures in motion.

Baumeister adopted this direction around 1923, parallel to the planar renderings and it remained almost exclusively limited to athletic scenes. Here the shaded volumes seemed more appropriate to the theme, as the Female Runner (1925), Tennis Player (1929), Figures on Blue (1928), and other athletes show. But he veered so far from his basic artistic conception with these works that he later called them an erroneous concession to the art of the New Objectivity (Neue Sachlichkeit) and destroyed many of them.

Even so, Baumeister led the sports pictures out of geometric rigidity. In some works he did briefly retain the severe construction that he had developed in the wall and machine pictures beginning in 1919 (e.g. Swimmers on the Ladder, 1929 - Machine Man, 1929-30), but differences are already apparent, too. The swimmers, for instance, appear in a somewhat more lively setting that even has slight surrealist elements. In contrast, the sports pictures beginning in 1933 remain bound to the plane, but clearly gain a sense of movement. Flowing forms and active outlines on a structure-rich painting ground produce rhythmic compositions ( Tennis, 1933 - Soccer, 1934). With them Baumeister retained a high degree of abstraction and even occasionally increased it.

Beginning of a Painterly Era

With the use of new formal elements, Baumeister's work entered a decisively painterly phase around 1930, which even increased toward the end of the decade. The manner of paint application, use of sand and putty, and surface treatment demonstrate that in this phase the intensive play with textures was at least as important as the motif.

This new painting consistently did not end with representations of painting itself, since in a certain respect Baumeister saw the painter as an athlete with a palette - striving restlessly toward new styles. It was precisely in these studio pictures that he articulated a new complexity in his paintings.

Elemental geometric forms are certainly still recognizable, although any sort of schematism has been surmounted. Triangle, circle, and square are layered and penetrated by active, curved lines, sand planes, and glazes. The formal elements enter into a free play that in turn offers the viewer more playing room to enter into a relationship with the image's contents. This concept also appears in the drawings and graphic works.

The departure from the static picture around 1930 appears across all subjects and techniques. From a tectonic phase Willi Baumeister entered into a painterly one.

Noticeable behind all the works of this section are the stimulating energies that Baumeister saw manifest in human activity - in sports, while painting, or at the machine. For him, they were the driving impulses whose effect he increased even more after he encountered stone-age cave-painting during a lecture in 1931. In their intimate formal relation to the wall and motif of the impulsive-existential (hunt), the rock paintings closely fit Baumeister's notion of the hidden fundamental energies in art as a whole. What he would publish in 1947 in The Unknown in Art, he now put into action in his painting.

In particular the numerous runners, jumpers and divers around 1934-35 - highly simplified, schematic black figures on a coarse, brown ground - were Baumeister's translation of the prehistoric paintings into a modern language. In their succinct terseness, his renderings of those years were more abstract than any preceding them. This is most evident in the 1934 drawing The Jumper as well as in Valltorta Runner of the same year.

The Soccer Player of 1934 (see above) is also reduced to this sort of sign-like quality. Baumeister's figures began to take on the character of hieroglyphs - letters - as later would be the case with his ideograms, too. The picture content's function as symbol or character was already long present in Baumeister's painting. Through their close relation to rock painting, though, these sign-figures emerged more clearly into the foreground. In 1935 Baumeister wrote to Eduardo Westerdahl that his pictures...

...no longer wanted to be 'beautiful compositions,' but rather, 'direct expression with elementary means.' The elemental energy should be made directly visible (cave paintings from primordial times) not via the detour of the means I previously used. In the pictures mentioned with the nearly black silhouette forms I have strived [to depict] the 'direct' in the perceptions.

Another group of works shows that Willi Baumeister always pursued several ideas concurrently. The airy Line Pictures are completely different from the sports and runner pictures on sand and from the color- and structure-plane based Painter images. He worked with sand ground and overlapping planes here, too, but the figurations are freer and more air bound. These works also have their start around 1924, although their forms are loosened from a tectonic link, as in Line Figure on Brown or Line Figures (both 1935).

Baumeister also increasingly withdrew from the human figure, without collapsing into the nonrepresentational. He called a rendering of these years, for instance, Tertiary Forms. Also within this complex are a few Flamelet Pictures from 1931-34 that, along with the line figures, lead into the Eidos series and Ideograms in the second half the 1930s.

Willi Baumeister's brusque dismissal from the Frankfurt teaching position in 1933 did not prevent him from consistently pursuing his adopted path. The biographical break is, at least in his art, not conspicuous. This particular continuity also distinguishes the following phases of his production.