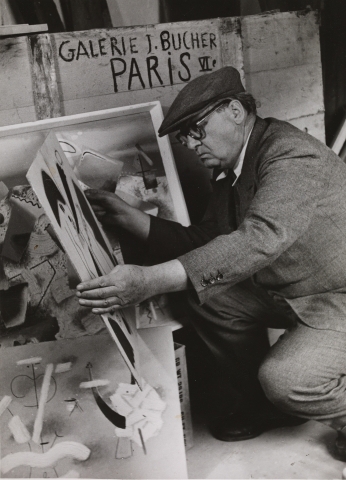 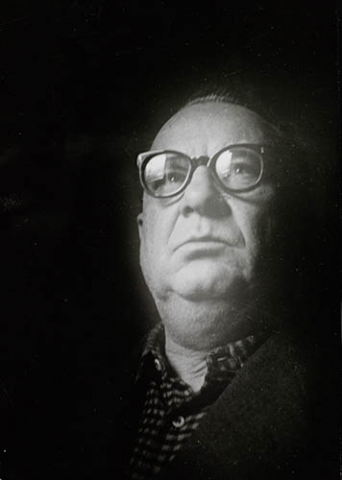 For Baumeister - as for many artists - the 'Stunde Null' (zero hour) of was a longed-for new beginning. His productivity had not suffered a real break during the years between 1933 and 1945, but now art production could take place in public again. Even if the Stuttgart studio was destroyed and plundered and the residence could only be reestablished with difficulty: in October 1945 Baumeister exhibited for the first time again in Germany with other colleagues in Überlingen. And with one fell swoop he was at the center of art life in Germany.

Exhibitions in the Postwar Period

The artistic significance that the public awarded Baumeister is revealed by the many exhibitions and engagements in these years that consistently received great recognition.

Among the most important are the survey show 'Modern German Art since 1933' in the Bern Kunsthalle in summer 1947, solo exhibitions in Munich, Brunswick, and Stuttgart, an international exhibition of abstract painting in the Parisian 'Salon des Réalités Nouvelles' in 1948, and in the same year the first Biennale in Venice after 1945. In summer 1949 the American military government in Munich organized the first comprehensive exhibition of German postwar contemporary art under the title 'Art Production in Germany' and at the end of 1949 Baumeister traveled to Paris for the opening of his exhibition at the gallery Jeanne Bucher, where he had already shown before and during the war. Moreover, important European museums extended their collections with works by Willi Baumeister.

Appointment to the Academy of Art

Already a few weeks after the war's end, Willi Baumeister was engaged as director and teacher at the Stuttgart Academy. After he turned down an offer from Dresden in February 1946, he accepted the professorship and directorship of a painting class in his hometown in March 1946. In 1951 he became the Academy's Deputy Director prior to retiring in February 1955.

His reputation in Europe grew steadily. In Paris in 1948 he was called Le Picasso Allemand (the German Picasso). At the end of 1949 his friend Fernand Léger wrote: "in my eyes Baumeister occupies an extremely important position among modern German artists".

Baumeister exhibited, wrote numerous articles, taught, and participated on art juries; not least of all he painted incessantly and beginning in 1945 was at the easel almost daily. Thus it was hardly surprising that the restless activity between exhibitions, academy, and studio would force him to retreat to a health spa in Bad Ditzenbach in 1949.

The Unknown in Art

In fall 1947 the first edition of the writings, The Unknown in Art, was published. In this book, which counts among the classical theoretical artist texts of the modern age and which Baumeister began writing during the last war years, he comments on artistic production and on the role of the viewer. He also presents an overview of the history of abstract art. It is Baumeister' early contribution to the understanding of modern - abstract - art that he subsequently vehemently defended from all attempts to pit it against objective art, as exemplified by the Darmstädter Gespräche (Darmstadt Dialogues) beginning in 1950.

Two years after the end of war Baumeister took up a former activity, and after a long interruption produced stage designs and costumes again. the ballet 'Liebeszauber' (Love Spell) in Stuttgart in 1947 became as much of a success as the play 'Monte Cassino' in Essen in 1949. Further designs followed until 1953. As such Baumeister returned to his earlier theme of applied art.

Willi Baumeister never wanted to come to a standstill; his painting reveals - technically and formally - his constant pleasure in trying out new things. When the silkscreen printing technique came out after World War II, he had the idea to use and develop it further - in the form of the Serigraph - for artistic purposes. He carried out his first works together with Stuttgart printer Luitpold Domberger. For Baumeister, Serigraphy ranked equally with other original graphic techniques such as etching and lithography, which he now often used, too. Between 1946 and 1955 he produced around 90 lithographic leaves and some sixty serigraphs. He often translated a painting into the language of the graphic print and varied it in the process. In last years of his life up to 1955 Baumeister designed numerous posters in the silkscreen technique and thereby forged a bridge to his beginnings as a sought-after typographer of the 1920s.