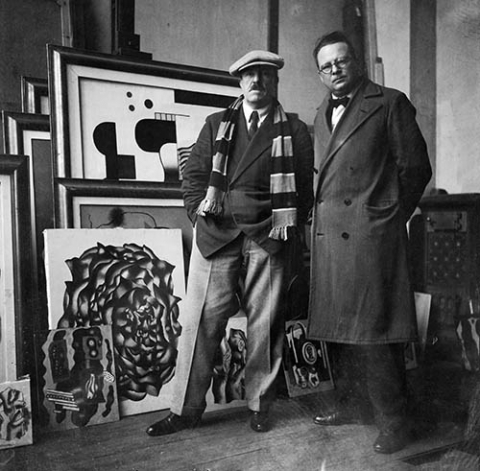 On the occasion of exhibitions, in letters to the artist, as well as in essays and reviews, numerous colleagues and critics commented on Willi Baumeister and his art. Here is a brief selection:

Je suis heureux de voir la belle tenue de vos oeuvres, ici rassemblés. Tout cela est éminement pictural. Vos dessins sont très beaux. Dès 1920, votre départ vous êtes sain et interessant. Vous allez à l'avenir avec sécurité. [I am happy to see the wonderful attitude of your works that are presented here. All this is eminently pictorial. Your drawings are very beautiful. Since your start in 1920 you are sound and interesting. You are going to have a future, with certainty.] (Letter to Baumeister, February 1931)

Willi Baumeister's art belongs to the healthy, natural, appealing appearances. I am convinced that this art, also for a layman, if only unconsciously, must awaken the impression of a creative activity that grows from a healthy ground and stands firmly on its own two feet. It is a natural positive energy that, in its living calm, remains the victor despite everything. (Catalogue to the W.B. exhibition, Milan 1935 - translated from Boehm (1995) )

There are two trends in modern art: the negative trend is destructive in its strivings ... the other modern trend, the positive trend, is also an art direction of the transitional period, but its tendency is receptive and preserving ... to this positive direction belongs Willi Baumeister's art, an art that is constructive, creative, and prophetic. (Catalogue to the W.B. exhibition, Milan 1935)

Baumeister's art has always strived for the universal ... [It] is much richer today than it was in the era of the wall pictures. It is universal in another way: much more inwardly than earlier. One now comes into direct contact with the human. One sees in these new works by Baumeister that the confused noises of the world, its alarms, threats, disappointments fade in the artist's studio like waves on the shore and become an organized play on the canvas: the noise of the century is completely captured in a heartbeat whose irregular regularity is life itself. Baumeister's new work possesses this universality: the rhythm of blood in the organism of the world. (Manuscript, 1950, in the Baumeister Archive - translation quoted from Boehm (1995))

He was the most European of German painters. So it is no wonder that he received no honors during his lifetime in Germany. ("documenta" catalogue, Kassel 1959)

Only my friends from the young West had the courage to say: Germany art after 1945 begins with Baumeister! ...No man fought for the liberation of art in our country like W.B. Every jury of the German Artist Union [Deutscher Künstlerbund] still lives on his bon mots: It doesn't please me, but it must be included ... (Address to the opening of the Baumeister exhibition, Galerie Lutz & Meyer, Stuttgart, April 25, 1959)

He was not just a figure, but a pillar, of the art scene in which guys like him achieved a rarity value and legendary status. (Frankfurter Allgemeine Zeitung, January 20, 1989)