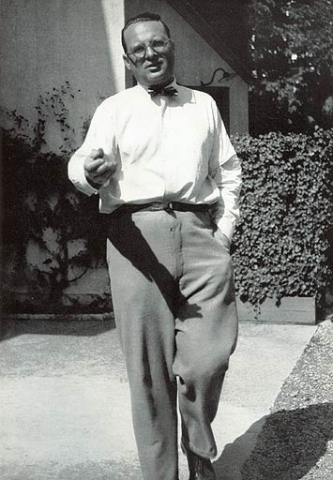 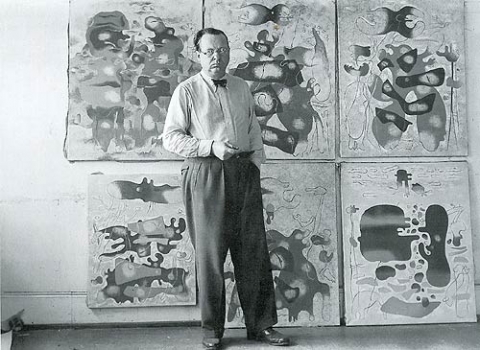 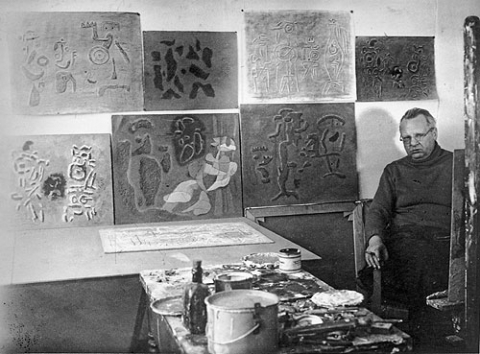 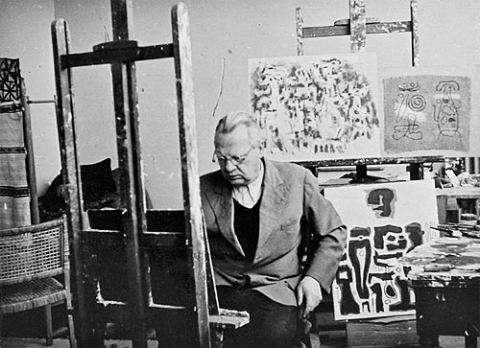 After a great deal of recognition from critics and the public in a time of fundamental change in Europe and after the professorship in Frankfurt from 1928 to 1933, which gave cause for great promise, the winds in Germany turned. Willi Baumeister's art suddenly was seen as sick and four of his pictures were displayed at the 1937 Munich exhibition Entartete Kunst (Degenerate Art).

For an unforeseeable time realizing an artistic development in the broader German public was no longer conceivable: the situation right now has no prospects for us (Baumeister to Julius Bissier on April 11, 1934). Still, where did he muster his optimism in the same letter: but I am solidly convinced that we will be needed one day and not the shallow canvas-knackers who bow to the authoritative opinion of the whole rabble.

You can read about how Baumeister and his family experienced the wartime in Wartime in the Diary.

In 1934 Baumeister participated in the exhibition Neue Deutsche Malerei (New German Painting) in Zurich before another monograph appeared in fall that year, this time by Eduardo Westerdahl. In 1935 solo exhibitions took place in Milan and Rome. At the beginning of 1937 he participated in a show of constructivist art in Basel and, concurrent with the exhibition Entartete Kunst, also exhibited in Paris under the title Unabhängige Kunst (Independent Art).

In fall 1937 he visited Paris again for an extended period and met friends Fernand Léger and Le Corbusier.

For the 50th Birthday

In 1938 Baumeister deposited a large number of pictures in the Basel Kunsthalle to keep them out of reach from the National Socialists. In July he participated in the London exile exhibition Twentieth Century German Art. And in January 1939 - on the day of his 50th birthday - the Paris Gallery Jeanne Bucher opened a solo exhibition with new works in the artist's presence.

Baumeister had been interested in cave and rock pictures since the mid 1920s and later in the sort of prehistorical art that - as with many other twentieth-century artists, too - had an impact on his own work. Beginning in 1935 he frequently made excursions to excavations and his own collection of prehistoric and nonwestern pieces gradually grew out of them.

Baumeister experienced the start of World War II in fall 1939 at Lake Constance. In 1940 he moved into his new studio in Stuttgart's Diemershalde. During the wartime, though, work on paintings grew progressively difficult because of canvas and paint shortages. Cardboard increasingly served as a painting surface before Baumeister out of necessity turned more to drawing. Moreover in spring 1941 he received a prohibition on painting and exhibiting: ...it isn't easy to withstand the depressions of this time. This for seven years now. Presumably I can no longer show my pictures in exhibitions. I thus work exclusively for myself alone. In October 1941, to escape the depression he traveled with his family to Italy for a few days.

In June 1940 Paul Klee, whom Baumeister had greatly admired and whose art had strongly inspired him to the end, died. Then in April 1943 the death of friend Oskar Schlemmer hit him very hard: ... while the bombs fell and the gunfire roared, I still especially remembered the late friend (Diary, April 13, 1943). I now also think of the dead body lying there that in life exuded so much and produce a great artistic oeuvre (Letter to H. Herrmann, April 14, 1943).

A European Artist in the Varnish Factory

In 1936 Willi Baumeister met the owner of the Wuppertal Varnish Factory Dr. Kurt Herberts through his friend, architect Heinz Rasch and in 1937 took a job at the company. There he worked alongside other artists defamed by the National Socialist regime: Franz Krause, Alfred Lörcher, Georg Muche, and Oskar Schlemmer as well as art historian Hans Hildebrandt. Despite the prohibition and constant surveillance, he worked on his art parallel to his activity in the varnish factory. For instance, Baumeister sketched tableaus for exhibition purposes and enamel boxes.

With the work on the wall pictures in the Herberts firm it was necessary to research ancient and modern painting techniques. Between 1933 and 1944 five publications grew out of these investigations, which were published under Dr. Kurt Herberts's name - including 10.000 Jahre Malerei und ihre Werkstoffe (1939), Anfänge der Malerei (1941), and Modulation und Patina (1937-1944) (10,000 Years of Painting and its Materials, 1939; The Beginnings of Painting, 1941; and Modulation and Patina, 1937-44). Baumeister also used the opportunity to publish his own works - if only anonymously - in these books. No one complained about this form of degenerate art!

The Unknown in Art

Willi Baumeister took advantage of the difficult period. From 1943 to 1944 he wrote almost daily on his manuscript Das Unbekannte in der Kunst (The Unknown in Art), which he reworked in 1945 and published in 1947.

The End: A Beginning!

In 1943 as the space in Wuppertal and ultimately Baumeister's Stuttgart house was partially destroyed - likewise via bomb attack - he moved with his family to Urach in the Swabian Alp. In April 1945 he fled with his wife and daughters to the house of artist-friend Max Ackermann (1887-1975) on Lake Constance to evade obligatory service in the Volkssturm (People's Storm) and a possible court martial. On May 8, 1945 he wrote in his diary: Victory day for the Allies.

Willi Baumeister quickly realized that his fear about never again being able to publicly work and exhibit was now over with. With great élan he embarked on a new beginning 1945-1949 in which he faced a great responsibility as artist, instructor, and theorist.

Kategorie:
Biography
Schlagwort:
1933 to 1945: Under the most difficult circumstances