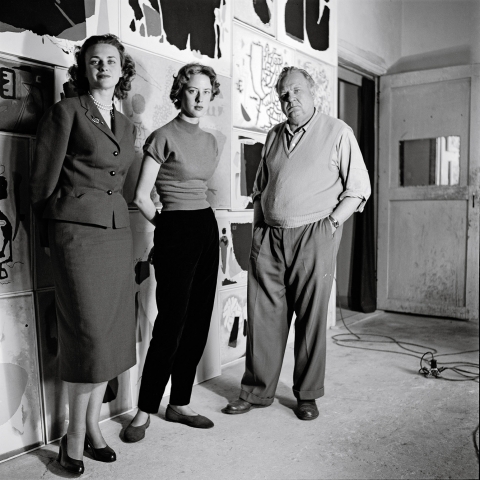 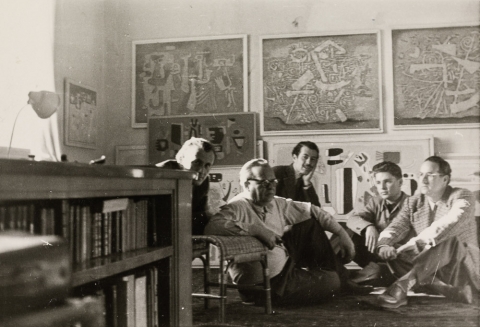 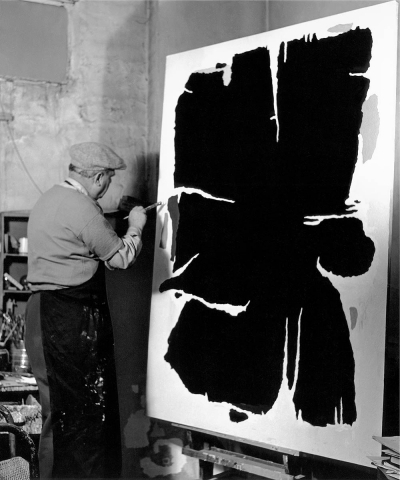 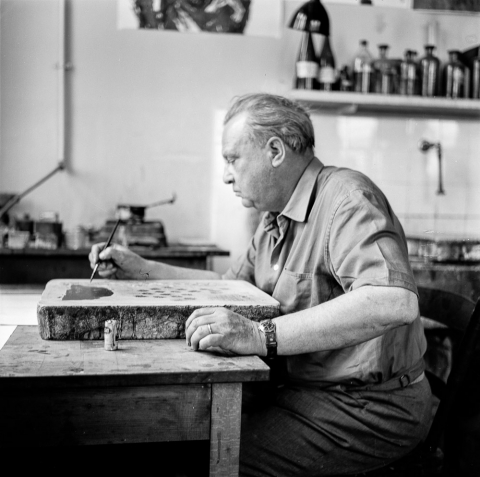 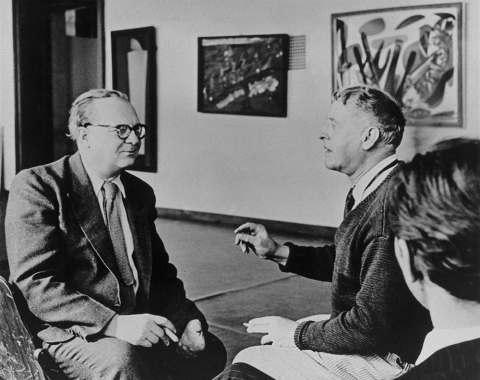 The last five years of Willi Baumeister's life were more artistically productive than any of his previous work periods, even though he was tremendously busy as both a teacher at the Art Academy and representative of the modern period in numerous exhibitions as well as an uncompromising champion of contemporary art in public.

His participation in an art congress in the Spanish Santillana del Mar in fall 1950 was the pinnacle of his involvement with prehistoric art and his research during the the Wuppertal years from 1938 to 1945. Baumeister held a lecture on painting techniques and conservation issues of the stone-age Bison pictures in the Altamira cave. On the return trip he visited the house of Cézanne. In 1953 Baumeister saw a large Picasso exhibition in Milan, which disappointed him somewhat because he found these late works weaker.

A great deal of exciting development is found in the rich painting production of his late work, including the Safer-sand pictures and Metamorphoses, the Aru-, Montaru- and Monturi-series, and the Han-i-paintings. He was still intensely involved with different printing techniques such as silkscreen printing and lithography as well as with stage design. With a number of exhibition posters, cover designs, and smaller printed materials he produced commercial graphics again, too, if far fewer than in the 1920s.

Death in the Studio

On August 31, 1955 Willi Baumeister died while at work on a painting. His death came unexpectedly - he was found sitting at the easel. His ashes were interred in the presence of many friends and colleagues in Stuttgart's Prague cemetery.

Only later would it become clear what a surprising loss the art world had suffered and what legacy he had left to posterity.

In 1950 the first exhibition of the group ZEN 49 took place, which Baumeister, Fritz Winter, and others had founded a year earlier. At the First Biennale of the des Museo de Arte Moderna in São Paulo, Baumeister received the first prize.

But the highlight of these years was a solo exhibition at the New York Hacker Gallery Gallery in April 1952 - his first exhibition in the USA. In 1954 the Württembergische Art Association organized a sweeping retrospective with about 150 pictures for the occasion of Baumeister's 65th birthday.

In February 1955 Willi Baumeister was awarded the Gustav Klimt Honor by the Vienna Secession.

Champion of the Modern

In summer 1950 the first so-called Darmstadt Dialogue took place. Baumeister participated in a discussion titled, The Human Image of Our Time, along with well-known art historians such as Gustav Friedrich Hartlaub, Hans Hildebrandt, and Hans Sedlmayr, psychoanalyst Alexander Mitscherlich, and philosopher Theodor Adorno.

The Dialogue ended in a quarrel as Sedlmayr and Baumeister's positions clashed fiercely with one another. Sedlmayr had already taken a clear position against abstract art in his 1948 book, Verlust der Mitte (Lost of the Center), while Baumeister and others defended it.

He was similarly uncompromising in fall 1954 when he withdrew in protest from the German Artist Union, after belonging to its executive board since its new founding in 1950. Baumeister found that in an interview on nonrepresentational painting, Karl Hofer (1878-1955) had expressed a disparaging view. This was preceded by a polemic public debate over nonrepresentational art between Hofer and art critic (and Baumeister biographer) Will Grohmann, a vehement advocate and promoter of abstract art.

Since the end of the war, Baumeister was intensely occupied with the production of stage designs and costumes. In these years Egon Vietta's piece The Three Masks in Wuppertal 1952 and Komerell's theater performance Punch and Judy Show for Grown Ups in Darmstadt 1953 were especially great successes. In one or the other case the stage designs were reviewed more positively than the plays themselves, as Baumeister noted once in his diary.