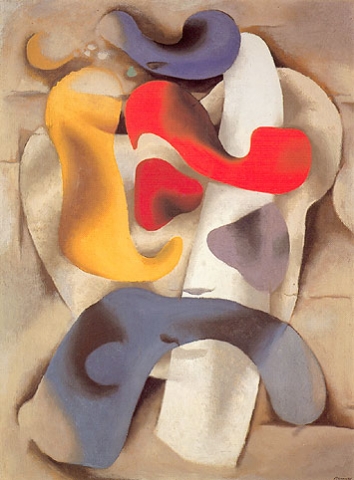 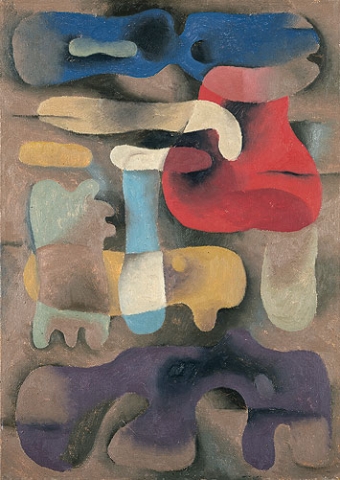 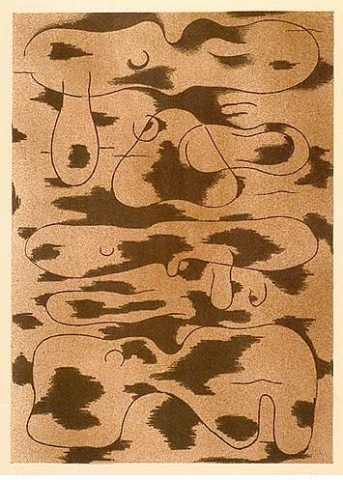 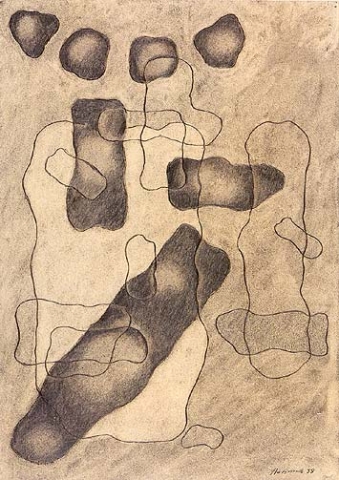 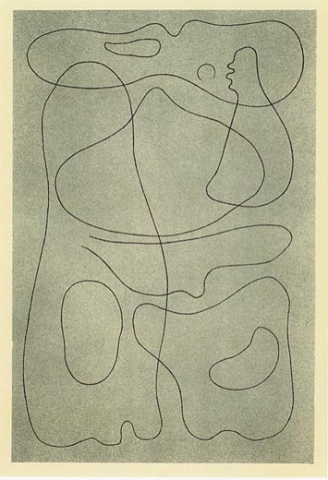 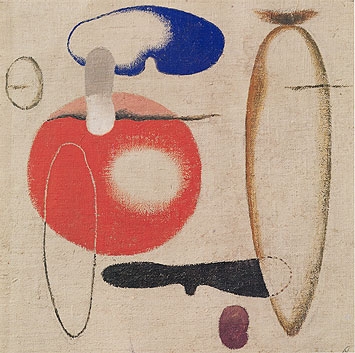 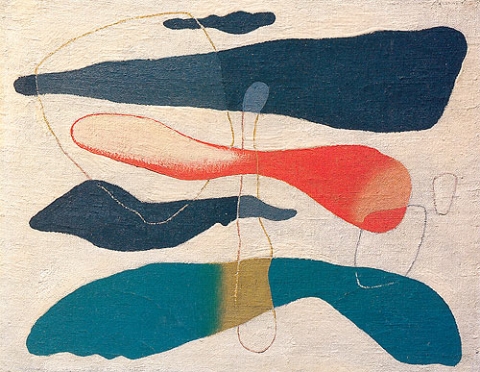 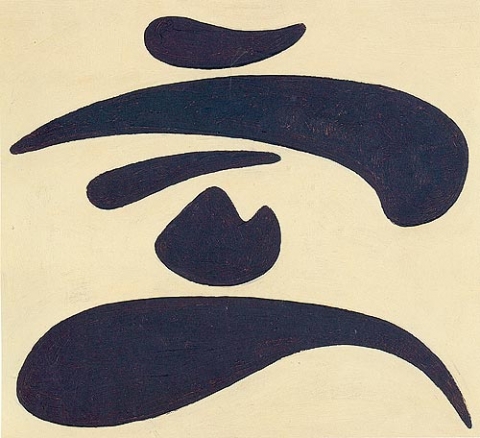 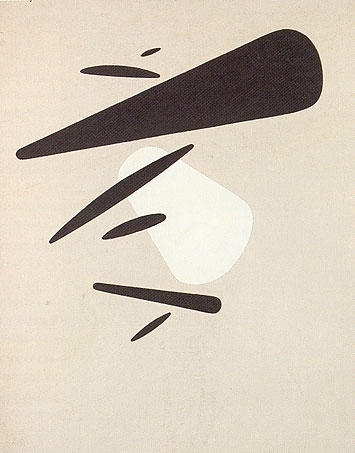 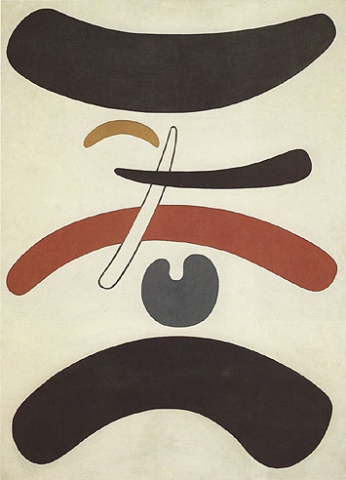 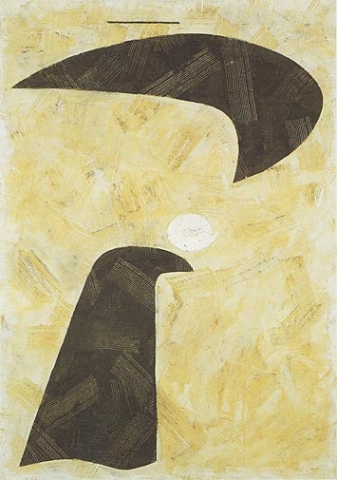 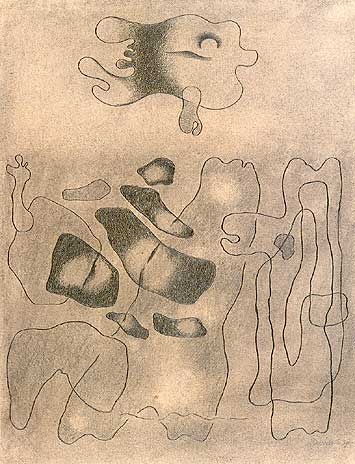 Baumeister's painterly development was not interrupted by the loss of his professorship in Frankfurt in 1933. His work and its development were correspondingly varied, even in the period after the National Socialist assumption of power. Out of a highly painterly work phase, he developed the extraordinarily reductive, organic, and symbol-like Ideograms in this brief work section beginning around 1936. From his turn to Goethe's concept of elementary plant forms emerged the form and color-rich Eidos pictures.

Free Play of Color and Plane

In purely external terms, this stage was marked by the Munich Degenerate Art exhibition in 1937, in which a number of Baumeister's works were also shown and, on the other hand, by the outbreak of war in September 1939. He now brought to maturity some of the pursuits he began in the early 1930s. Baumeister's painterly phase culminated in these years. With Figure in Motion (1936) and Mask 4 (1936), he withdrew further than ever before from his art of the 1920s. In current works he continued striving toward new expressive forms, using those developed shortly before in the last sports pictures.

He now, however, increasingly reduced references to the human figure to a free play of colors and planes. Amoeba-like shapes seem to swim over the surface. They clearly assert themselves against the neighboring elements, but still engage in a dialogue with them, give them room, and for their part advance into free space. Mask 4 is a concise example of Baumeister's strong abstraction abilities, since it equally concerns a mask and a figure. As removed from the human figure as the composition initially appears, limbs, eyes, and other bodily components can be gradually deciphered. The extraordinary sign-like quality of these works offers room for several interpretations.

Even in his drawings and graphic prints, Baumeister was able to retain his markedly painterly manner of rendering. The lithograph Line Figures on Brown (1936) displays the same formal quality as the painting Mask 4. Its slightly blurred planar elements do not compete with the curved outlines, but, in a sense, assign them color value. As in the painting, one recognizes the ambivalence between figure and mask, which also resonates in the subtitle Large Mask. As was often the case with the lithographs, Baumeister translated his oil paintings into the language of the graphic print. This similarly applies to the drawings of those years, as in, for example, With Dark Forms of 1938.

Lines on Blue of 1937 corresponds to the previously discussed lithograph with sedated tonal values. And the individual components are now even more weightless. The reference to the newest ideas is apparent in a comparison to KFLS of 1936 (meaning: composition - colored - linear - floating ): the painting also belongs to the painterly phase, but the floating forms loosen themselves even more strongly from an unambiguous figural context. As such this work is the link to a second work complex - the ideograms.

Ideogram means idea sign or (picture) symbol. A sign-like quality as a basic element of an abstract art was manifest in Baumeister's oeuvre from the outset. Beginning in the mid 1930s, the symbol character of his works grew increasingly strong.

Now the proximity to Asian characters, which are simultaneously also symbols, emerged into the foreground. In Far-Eastern calligraphy Baumeister discovered something like the primordial meaning of artistic expression: the sign-like quality and symbol-power of a few strokes appeared more expressive to him than the representation of nature. Noticeable in the Toris is even an affinity to the architecture of East-Asian temples or shrines.

On closer inspection a connection to the Runners of 1934 becomes apparent: head, arms, waist, and the extended step movement are also recognizable in the ideograms of 1936. As such, this painting still has a certain human dimension, whereas Floating Forms with White (1938) has become pure form. The Ideogram of 1938 also verges on the nonrepresentational, whereas Tori (1938) formally stands in between.

Individualism instead of Schematism

This work phase is most strongly distinguished by the Eidos pictures. On the one hand, they are the pinnacle of the painterly efforts. On the other hand, they already point toward the next work complex of the 1940s. This series captivates with its great variety of structures, color shading, and constant new discoveries. With them Baumeister leaves any sort of schematism behind.

A labyrinthine tangle gives each work individual character. One continually sees a type of figure composed of curved planes and lines that distantly recalls human forms, but floats like a spirit above the ground. The works concern mythical scenes in a fantasy realm that allude to the origins of the world. The figures seemingly grow from earth, sperm, lava, stone, and wind - removed from any reference to the real world and yet somehow familiar in their playful-amusing lightness. Individual components of the Eidos pictures also recur in other works of this phase (see above Figure in Motion, 1936 - With Dark Forms, 1938), but are integrated into a new idea.

It is not certain what was meant by Eidos. Clearly, it has a linguistic affinity to ideogram and the idea of the primordial sign or prototype. Goethe's concept of a primordial plant and other early forms of life also inspired Baumeister. Another painting from this phase similarly bears the title, Primordial Vegetable ( Urpflanzlich, 1939). For him, the prototypical belonged, more strongly than ever, to the determining factors of not just modern artistic work, but indeed of the modern human and its world of experience.